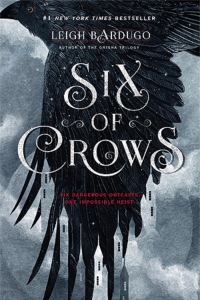 Criminal prodigy Kaz Brekker has been offered wealth beyond his wildest dreams. But to claim it, he’ll have to pull off a seemingly impossible heist:

Retrieve a hostage
(who could unleash magical havoc on the world)

Survive long enough to collect his reward
(and spend it)

Kaz needs a crew desperate enough to take on this suicide mission and dangerous enough to get the job done – and he knows exactly who: six of the deadliest outcasts the city has to offer. Together, they just might be unstoppable – if they don’t kill each other first.

While I was reading the first half of this book all I could think was this book was so over-hyped. The first half of Six of Crows is pretty much all back story for all of the characters. When it comes to getting back story for characters I feel like half the book is over kill. Depending on the book I would much rather there only be a few chapters of back story and then get into the best parts of the story. Once I made it to the second half of the book I was hooked. It drew me in from there and I just kept wanting to read so I could find out what was going to happen to each of the characters.

Six of Crows is told in multiple POV, 5 to be exact, and while that actually worked out for this book I am not a fan of so many POV. Like I said earlier it took me until the half way point to really get into the story. That is where the pace finally picks up and it becomes action packed. Plus there is a hint of romance scattered throughout the story. Don’t let the fact that there is romance keep you from reading this book though because it doesn’t take the focus away from the rest of the story at all. For me personally though I wish there was more of the romance. Because of the way the story ends you don’t really get any closure for any of the characters but that’s a good thing because it leaves you really wanting to read the second book.

I really loved all of the characters but if I had to pick who my favorite one is I would most definitely have to go with Kaz. He is such a bad ass character who always has something up his sleeve. Speaking of him always having something up his sleeve I would really like to know how he does it. After everything he has gone through I loved seeing him kind of open up to Inej. By the way I totally ship them.

I can’t wait to read Crooked Kingdom. I have heard that it is kind of boring but I really need to know where the gang is and what is going to happen to them and between them.

It took me almost a month to get through this book because I was kind of in a reading slump during the time I was trying to read it so I was slowly climbing my way out by reading this.

Have you read Six of Crows? Did you like it? Did we end up feeling the same way about it? Did you enjoy Crooked Kingdom more or less than Six of Crows? I would love to here from you in the comments.

7 thoughts on “Review: Six of Crows by Leigh Bardugo”