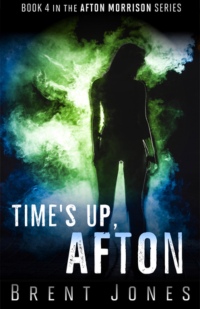 Some secrets stay buried for a lifetime, but nothing lasts forever.

Connected to a number of high-profile deaths, Afton finds herself not only under scrutiny from the chief of police, but damned in the court of public opinion, as well.

In the aftermath of the fiery assault on Wakefield, a low-level gang has infiltrated the town, flooding its streets with bad drugs, killing several teenagers. As Afton prepares for the final showdown with her tormentor, she marks each gang member as a target for elimination, in a methodical plan to gain the upper hand. What follows is a race against the clock that will keep readers guessing until the very last page, as Afton risks life and limb to fulfill her murderous mission of doing good in the world.

Time’s Up, Afton is the fourth and final part in a new serial thriller by author Brent Jones. Packed with grit and action, The Afton Morrison Series delves into a world of moral ambiguity, delivering audiences an unlikely heroine in the form of a disturbed vigilante murderess.

I want to thank the author for providing me with an ecopy in exchange for my honest review.

Time’s Up, Afton is the fourth and final book in the Afton Morrison series and it picks up right where the 3rd book left off. This book like all of the others in this series is action packed and full of twists that I dare say you won’t see coming. That being said though I kind of felt that I was reading two different stories. Books 1-3 have all been about Afton and her urges and the man in the shadows and all of a sudden in this book she’s also going after meth dealers. While it all worked out I could have honestly done without that because I just wanted to get back to the root of the story.

The ending for this book wraps everything up but you are still left with a cliffhanger. As I say in all of my reviews for these I hate cliffhangers but it was ok because I could immediately read the other books. With this one as far as I know this is the last book so we are left to our own imaginations which I am not a fan of at all. Its not a bad thing it’s just personal preference. I wanted more from the ending. I wanted everything to be wrapped up and to not be left with any questions.

I definitely recommend this series. They are fast paced and full of twists and if you love morally grey characters this is definitely the book for you.

12 thoughts on “Time’s Up, Afton by Brent Jones”