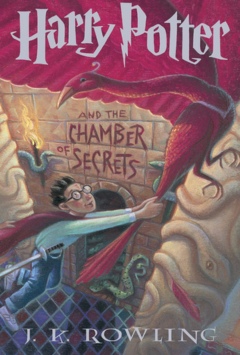 Title: Harry Potter and the Chamber of Secrets

It’s time to talk about the second book in the Harry Potter series. Before we get started I wanted to say that my ratings for this series is going to be 5 stars for every book because I love them so much. Also be warned these posts can and most likely will contain some SPOILERS so if you haven’t read them you probably should skip over these posts

Favorite Characters: Ok so Harry, Hedwig and Hagrid are still my favorites and will continue to be throughout the series but there are some new additions for this book.

Hermione: In the first book I found her very annoying for the majority of the book which is why she landed in the least favorite character category but by the end of book one she grew on me and has since become a favorite. She is still a know it all but that’s just who she is and it’s less annoying now.

Dobby: While he tries to sabotage Harry his heart is in the right place. I love that he was so loyal to Harry even though he was a slave to Malfoy.

Least Favorite Character: Snape, Draco, the Dursleys and Mr. Filch will continue to be my least favorite characters as well but once again we have some new additions.

Gilderoy Lockhart: Ugh this character is so full of himself and I can’t stand people like that. Not to mention he takes credit for things he didn’t even do and takes away peoples memories so he can take said credit. I would roll my eyes every time he was part of the dialogue.

Favorite Scene(s): I have waited so long to type this up since I read the book so its not fresh in my mind.

1.) I’ve always loved the scene where Ron, Fred and George bail Harry out. The Dursleys step up there abuse in this book and literally have bars on Harrys window. And how Mrs. Weasley can go from yelling at her boys for stealing the flying car to being so sweet to Harry is amazing.

2.) Ok so Harry always saves the day but I love how he saves Ginny in this one. It’s like a glimpse at what’s to come for them and I know that a lot of people don’t like them together but I do.

1.) Anything where Gilderoy Lockhart was involved. I think he annoyed me more than Hermione did in the first book.

2.) The beginning with the Dursleys. I HATE how they treat Harry and it seems like they have amped up the abuse in this one.

That’s it for this one. Hopefully I will be able to finish at least one more of these this month. I’m going to be picking up Harry Potter and the Prisoner of Azkaban.

5 thoughts on “Reread: Harry Potter and the Chamber of Secrets By J.K. Rowling”