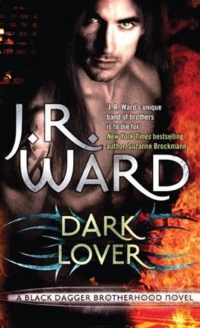 In the shadows of the night in Caldwell, New York, there’s a deadly turf war raging between vampires and their slayers. There exists a secret band of brothers like no other – six vampire warriors, defenders of their race. Yet none of them relishes killing more than Wrath, the blind leader of the Black Dagger Brotherhood.

Several booktubers that I follow rave about it this series so when I found it at my local Goodwill store I bought it. I had meant to read it last year for the romanceopoly challenge but I failed miserably but luckily the challenge is taking place this year as well and this book fit one of the prompts. I also buddy read this with Jonny from Jaunts & Haunts.

I didn’t know much about this book going into it. I honestly don’t even think I ever read the synopsis. I just knew it was about vampires and that said booktubers from above loved the series. I am so glad I finally read this and I will for sure be continuing with the series.

This book is mainly Beth and Wraths story but we get side stories as well which is honestly really my only complaint. It’s told in 3rd person and it kept switching between several different characters. I couldn’t even tell you haw many different characters it switched between. I was able to keep up with it but it was definitely annoying.

It was a little insta lovey but for me it was believable. I know some people have issues with this trope so I thought I would mention it. It is a little steamy at times but honestly I was kind of expecting more. I also wanted to mention that there is some animal cruelty in this book. It’s talked about two times that I remember but it wasn’t a big part of the story. I could have honestly done without it but I saw how it fit in the story.

I have only read this book so I can’t be certain but it seems like at least some of the brothers have some sort of disability. Wrath is pretty much blind and Phury has a prosthetic leg. Because this is Wraths book we don’t really learn much about the other brothers but I love that these vampires aren’t perfect in every way.

So yeah I really enjoyed it and really wish I would have gotten to it sooner. It’s a great strat to a series and I can’t wait to dive deeper into this world and read the next book which is Rhage’s story.