Jonny and I have finally gotten around to doing another buddy read and today I will be sharing our discussion. If you click the link it will take you to Jonny’s review of the book. As for my review it will come eventually. I hope you enjoy!!

Hey everyone it’s me again. As I’m sure y’all know I love romance but I will read anything that sounds intriguing to me. 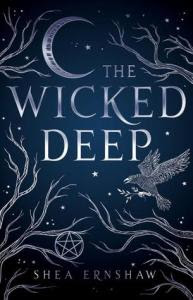 Welcome to the cursed town of Sparrow…

Where, two centuries ago, three sisters were sentenced to death for witchery. Stones were tied to their ankles and they were drowned in the deep waters surrounding the town.

Now, for a brief time each summer, the sisters return, stealing the bodies of three weak-hearted girls so that they may seek their revenge, luring boys into the harbor and pulling them under.

Like many locals, seventeen-year-old Penny Talbot has accepted the fate of the town. But this year, on the eve of the sisters’ return, a boy named Bo Carter arrives; unaware of the danger he has just stumbled into.

Mistrust and lies spread quickly through the salty, rain-soaked streets. The townspeople turn against one another. Penny and Bo suspect each other of hiding secrets. And death comes swiftly to those who cannot resist the call of the sisters.

But only Penny sees what others cannot. And she will be forced to choose: save Bo, or save herself.

Jonny is an Amazon affiliate and earns a tiny commission for purchases made through the Amazon links in this post. It’s a great way to help him keep things running on his blog if you’re already intrigued enough to make a purchase.

So this author was a first for both of us I believe. Overall, how would you say you felt about the book? Do you think you would read anything else by this author?

Yes this is the first book I have read by this author and I would for sure read something else she has written.

Overall I ended up enjoying this one. For some reason I was expecting mermaids which makes no sense especially since I read the synopsis before starting the book.

How about you? I know it wasn’t your favorite but would you pick something else up by this author?

Cool! Glad I didn’t remember that wrong, haha. I haven’t read anything by Ernshaw either.

I’m glad you liked this one. I did enjoy this to a certain degree, but I would have to be in a specific mood to give her work another try.

Oh, I didn’t think of mermaids. Based on the blurb you could interpret it that way or sirens. I just assumed ghost possession.

What are some of the things you liked most about the book?

I honestly don’t know why I was expecting mermaids. Maybe I had this confused with something else.

Well you know me I always latch onto the romance so I was liking that in the beginning and I loved the history. Just the overall story was good but there were some things that I didn’t like but I can’t really talk about them here because of spoilers.

Maybe you confused it for that new D. Wallace Peach release I mentioned not too long ago? That one has mermaids. It’s totally understandable with how many books we have on our insane TBR’s!

Yeah, that’s actually why I wanted to read this one, because it had both the spook factor and the romance. I ended up not caring very much for the romance, but that was mainly due to what ended up happening in the book, which is also a spoiler. Yikes, this is hard to talk about! I will say that the romance factor moved too quickly for me given the short amount of time this book takes place over.

That being said, I really did like the setting. The dreary seaside town was different for me, and I liked that. I also really liked the eerie history Sparrow had. It gave extra background to everything that was enjoyable.

Are there some more broad things you might be able to talk about that didn’t quite amaze you in general?

Yeah I liked the romance in the beginning but after some reveals I wasn’t happy with the ending. It felt wrong to me. This book is really hard to talk about without spoilers. I agree that it did happen too fast.

I loved the setting and the history it was fun to read about.

It’s been a while since I finished it so I’m trying to remember everything. A thing that bothered me was the lack a parental supervision. I mean I find it hard to believe that the parents just sit back and let their kids throw those parties and get drunk knowing what happens.

Right. I liked the way Penny didn’t like him at all at first and then it moved from there, but it went too quickly from that to “I need you like air” to where I wasn’t really buying it.

Yeah, it felt like the history could’ve happened in any small town given what happened with the Salem witch trials way back when. That part felt very believable.

Oh, that’s a great point. Those parties happened wherever and adults didn’t say diddly squat. If anything their complete absence means they probably knew about their kids having those drinking parties and didn’t really care enough to do anything about it. The kids were certainly loud enough, and with a huge bonfire it’s a dead giveaway in a town that small. Totally agree with you.

I actually wish that the plot could’ve been a bit darker. From the blurb we knew that the Swan sisters would be luring boys to their deaths out in the water. We did get that, but we didn’t really get much more. Maybe knowing that in advance took away the surprise of it all, but why stop at just drowning the boys? Why not take it up another notch like murder or something else darker and scarier?

I also thought Hazel’s overall plan was severely lacking for someone who had nothing but time on her hands.

I just wanted the book to give me a good sucker punch here and there and I never really got that. 😦

If it would have been darker I would have liked it but I also enjoyed what it gave us to but if it was darker it could have added something to the story.

I understand why they just did the drownings. They were giving them the same fates as them and to my understanding the boys were trapped down there with them after they drowned. Maybe I’m making that part up but I remember them telling Hazel that if she wanted the boy all she had to do was kill him and he would be with her forever.

Yeah Hazel didn’t have a plan lol and what little plan she had was severely lacking. I mean just from how she described what would happen we knew that plan wouldn’t work.

This definitely isn’t a new favorite. It didn’t blow me away but I thought it was an ok story. I think I’ve settled on giving it 3.5 stars now that I’ve had time to think on it.

Yeah, you know I’m a gunner for dark stuff, so I’m probably usually going to say “darker, darker!” haha. It was a nice premise, it just didn’t quite go far enough for me.

That’s right. They did mention that the souls of those they took would be with them forever. Seeing that part of things would’ve been interesting too.

Exactly! At first I thought maybe she’d figure something out but then she just kind of gives up and thinks maybe she’ll get lucky. That’s some extremely hopeful sentiment/denial for a ghost, especially when she’s been through this process so many times.

Yeah, it’s not a favorite for me either, though I’m glad we gave it a chance. It was something new to us, and that’s always worth giving it a shot.

I think that’s a very fair score. I’m gonna keep mine at a 3. Thanks for reading this one with me!

Maybe we’ll have to read Warm Bodies next or something! Zombie love, how cute! :p

You know me I love it all. If it’s dark great if it’s not that’s great too.

Yes I definitely look forward to our next buddy read but it will probably be next month before I can fit it in. Let me know what you want to do. You know I am always down for buddy reading and as always thank you for buddy reading with me.

Yeah, and sometimes it’s good to try something a smidge different. That’s the glory of these buddy reads. 🙂

I’m looking forward to the next one too! No worries on timing. I start grad school next month so it’ll be touch and go for the most part. Thanks again for doing this with me. I’m sure the next one will be a lot of fun too!

That’s it guys I hope you enjoyed this post as much as Jonny and I enjoying reading the book and talking about it. As always Jonny is the mastermind behind these posts so I have to thank him for everything he puts into our buddy reads. Here’s to hoping our next buddy read will be one we both love.