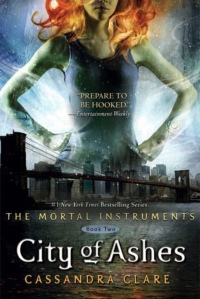 City of Ashes by Cassandra Clare

Erin and I continued on with our buddy read of The Mortal Instruments and read City of Ashes. This is the second books in the series. I felt so bad for Jace in this book. He didn’t deserve to be treated the way he did. I was angry with everyone on his behalf. I’m so over the whole are Jace and Clary really brother and sister aspect. It is being drug out way to much and the fact that they think they are brother and sister yet still are romantically attracted to each other is just wrong. I don’t actually think they are really related but still it’s wrong. I’m still enjoying this series just not as much as I did The Infernal Devices trilogy.

The Twelve by Justin Cronin

I don’t even know what to say about this book. I am absolutely loving this series. This is the second books in the series and I loved it just as much as I did the first one. I am fully sucked in and I am attached to several of the characters at this point. I literally only have 2 complaints about the series so far. The first one being there are a lot of characters and I am struggling to keep up with all of them and also the timeline. Despite those two things I am fully sucked in and can’t get enough. I can’t wait to read the third book in September and see how things end. 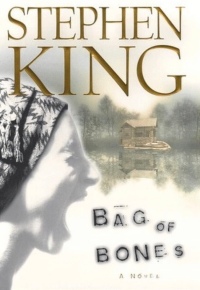 Bag of Bones by Stephen King

Ugh this ended up being a disappointment. When I started it I was enjoying it. I didn’t understand what the whole point of the story was but I was enjoying the story and I wanted to find out how things ended. The ending is what ended up ruining this book for me though. I didn’t like where King took this book. I can’t really go into detail because of detail because of spoilers though so it’s hard to explain why the ending ruined it. I don’t know what else to say about this book. I’m glad I read it that way I can mark it as a King book I have read but that’s it.

The Lost Wife by Anna Mansell

Thanks to NetGalley for providing me with a copy of this book in exchange for my honest review.

This book is split up into 3 separate parts and we get 2 POVs. The first part takes place immediately after Ed loses his wife in a tragic accident days after their son Oli was born in which his brother Simon was involved. It’s hinted that Simon is hiding something and I was immediately curious.

The second part is where Ed and Rachel meet and this is where everything unfolds. We learn a lot about each of the characters in this section as well as the side characters. There is then a time jump to 4 years later which was very abrupt to me and this is where we learn Simons secret which after all of the build up was actually a big let down. From the way Ed was acting I was expecting Simon to have done something horrible. The romance in the book was also not really existent but implied and honestly unbelievable and very rushed. So while I enjoyed some aspects of the story others aspects kind of let me down.

10 thoughts on “Mini Reviews: City of Ashes, The Twelve, Bag Of Bones & The Lost Wife”