It has been a while since me and Jonny did a buddy read with each other. Since April to be exact. I love buddy reading so I was so excited when he emailed me asking if I had the time to fit in a buddy read. I of course said yes. We have both posted our individual reviews on our blogs. You can see his here and mine here. Today’s post is the discussion we had on it. I think we kept it pretty spoiler free. There might be some slight spoilers but nothing major. I hope you enjoy todays post.

I’m Jonny! I love zombies, but not in a romantic way. All that necrotic skin … Gross!

Hey guys it’s Misty again. This sounded like the perfect read for me and Jonny because it’s a mix of what we both love. I love romance and he loves horror. Did it end up working out? 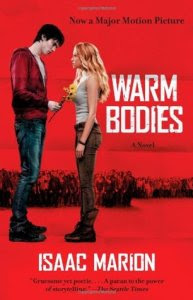 R is having a no-life crisis—he is a zombie. He has no memories, no identity, and no pulse, but he is a little different from his fellow Dead. He may occasionally eat people, but he’d rather be riding abandoned airport escalators, listening to Sinatra in the cozy 747 he calls home, or collecting souvenirs from the ruins of civilization.

And then he meets a girl.

First as his captive, then his reluctant guest, Julie is a blast of living color in R’s gray landscape, and something inside him begins to bloom. He doesn’t want to eat this girl—although she looks delicious—he wants to protect her. But their unlikely bond will cause ripples they can’t imagine, and their hopeless world won’t change without a fight.

Hey Misty! Thanks for agreeing to do this buddy read with me. It’s been quite a while with grad school going, but I’m glad I did this with you!

How did you like this book overall? Did you watch the movie back when it first came out?

I thought the writing style and setting were really strong, but I had some mixed feelings about pretty much everything else. I watched the movie when it came out, and from what I remember (it’s been a decade, can you believe it?) I did like it, though it’s not my favorite zombie movie. I’m a big fan of Teresa Palmer (Julie in the movie) though!

Of course!! I’m so glad you reached out as soon as you had time. I love buddy reading and I’ve missed our buddy reads.

Overall I think it was an ok start to a series but I did have some issues with it. I never watched the movie. I always try to read the book before I watch the adaptations of them. Now that I’ve read it I’m going to have to see if it’s available on Netflix or Amazon Prime.

I loved the concept of the book. I’ve never read a book from a zombies POV so this definitely puts a unique spin on zombies. For the most part I think everything was done really well however we get absolutely no answers in this book so I am left with so many questions. What is happening to the zombies? Why is it happening? Plus so many others.

Aw, thanks! I missed it too.

Yeah, I felt the same way too. A big issue I had was getting some answers as to why R is a different zombie and how he fits into the scheme of this strange change in the world. Also, how this Perry dude figures into it as well. R has killed plenty of humans, but somehow Perry is different. There’s just not enough explanation, even if it’s a series to really entice people to continue on. You gotta give them something, hang that proverbial twinkie on a stick or what have you in front of people so they keep going.

Back when the movie came out I wasn’t much of a reader to be honest, so I never really gave it much thought until a few months ago. Different life haha. I hope you like the movie!

I really loved the concept too. I can’t recall any other instance of being in a zombie’s head and feeling what they’re feeling. It was a new experience, and I really enjoyed that. I do wish we would’ve seen the more violent side a little bit more at the beginning to really separate the thoughtful him from the ravenous him, but it was still an intriguing thing that was pulled off well overall.

I also think the writing style kept me going too. It was really easy to read and flowed pretty smoothly. It did get a little bit of purple prose here and there, but never too much for me. I didn’t roll my eyes or anything, promise!

Did any characters stand out for you?

All those scenes that had to do with Perry were kind of annoying to me. As of right now I feel like they weren’t needed and they took me out of the overall story every time they happened. Plus it was just weird to me. We definitely need a little more explanation as to why things were happening. We were basically just thrown into this apocalyptic world and are expected to except what is going on. I can’t do that I need definitive answers.

I don’t even remember exactly when the movie came out. I remember the days of me not being a reader. I didn’t know what I was missing!! It might be a while before I get to watch it because it’s only available on Amazon Prime to rent or buy.

I get why we don’t have zombie POVs. Normal zombies don’t have thought they are just about the kill so I don’t think that would make for a great book. Yeah, I think showing him a little more like a zombie in the beginning would have been good. We do get a couple of scenes where he acts like a real zombie but showing the contrast would have been a good addition.

I didn’t have any issues with the writing. I think it flowed well and nothing came off cringy to me.

I don’t think any of the characters really stood out to me. They were all just ok. How about you?

You know, at first I didn’t mind the Perry scenes, but when it became a regular interval for the book it did kinda grate on my nerves, especially since we didn’t know why this strange phenomenon was happening. While it did help explain what happened with him and Julie I think that could’ve been dealt with in another way. Maybe R simply talks to Julie and asks her (as Julie would say, “use your words, R!”).

I totally agree with you. There’s gotta be at least a base level of answers that we get, and this novel straddled the borderline of not enough. Fingers crossed we get some more answers in the next book! Based on how things ended and the changes along the way, the next book should move a bit more smoothly, which could mean more action, romance, and crazy zombie fighting scenes.

It was way back in 2013, 7 years! Right? I had no idea either until I moved to Kansas City and made my big ole life change. Well I hope you do get a chance to check it out. You’ll have to tell me what you think!

For sure. A book centered on a zombie character that just hunts down humans and eats them would get very boring after a while. They have such a one-track mind, but it would’ve been good to have a bit more polarization so that by the end of the book you could really tell the difference that much more.

Hmm, I wouldn’t say any of the characters were necessarily great, but there were bits I liked from each. Julie’s no-nonsense demeanor and how ready she was to run or kick butt spoke to me, and M’s humor was funny since no other zombies really showed that trait.

Have you read a lot of zombie novels before? This is something a little new to me, which is a little funny considering how much I love horror. I’ve watched many, many zombie movies, but for some reason never quite got into novels. I’m having a fun time overall.

Everything with Perry pretty much annoyed me from the get go. If R was just getting normal flashes of Perry’s memories I don’t think it would have bothered me as much. What made it weird was when it was like they were carrying on conversations with each other that had nothing to do with whatever memory R was seeing.

I sure hope we get some answers in the next book because honestly if I’m left with more question than answers again I probably won’t continue with the series.

I haven’t read a lot of zombie books but I have read a few here and there. I can’t remember any of them right now. I will have to go through my Goodreads to figure out which ones I’ve read.

You make some really great points. The memories themselves are one thing, the conversations take it up another level, which makes it even worse because we don’t know the source of the first phenomenon, let alone the second. It’s all one big question mark.

I’m really holding out hope for the second book, but I’m 100% on the same page with you. If I don’t get at least a moderate amount of answers to keep me going and entertained at the same time, I probably won’t finish the series.

Oh okay, so kind of around the same department as me. I’m currently in the middle of Nick Clausen’s Dead Meat series and it’s pretty darn good so far, but other than that and this series I haven’t read any other zombie books.

Thanks again for doing the buddy read with me. I’ll be crossing my fingers on the next book in this series being a winner!

I will have a look through my Goodreads and let you know which ones I’ve read.

You know I am happy to do a buddy read anytime so long as I can squeeze it in. Look forward to our next one!!

Thanks for joining us on this buddy read and rant of Warm Bodies by Isaac Marion. We had a lot of fun and hope you did too!  We will definitely be doing some more buddy reads in the future, so stay tuned! If you want to see our other buddy reads you can do so here, here, here and here. I hope you enjoyed this discussion post as much as we had putting it together. Thanks to Jonny for buddy reading this with me as well as getting this post put together. If you aren’t already following his blog you definitely should.